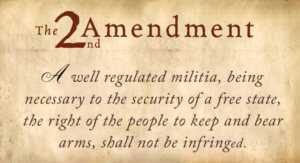 In a 1755 letter to the Pennsylvania General Assembly Ben Franklin wrote  “those who would give up essential liberty to purchase a little temporary safety, deserve neither liberty nor safety.” However, while its original context, which related to tax policy, may not apply, the words lend themselves to a conversation that lawmakers should be having. How should our country address liberty, but also safety, when it comes to firearms and cannabis?

Recently, the House of Representatives passed H.R. 38, the Concealed Carry Reciprocity Act of 2017allowing for individuals to receive reciprocity for state issued concealed carry permits allowing them to carry a concealed weapon in another state that permits the concealed carrying of firearms. To be eligible for a universal carry permit, the individual must be able to possess, transport or receive a firearm under federal law. For over 2 million medical cannabis patients, this creates an unworkable impasse.

A short time before the voting on H.R. 38, the Honolulu Police Department issued  30 letters to gun owners that they had to turn in their firearms in 30 days, indicating that the use of medical cannabis disqualifies and individual from the ownership of firearms and ammunition. This policy was reversed only a short time as it was initiated, as possession of a medical cannabis card doesn’t automatically equate to using cannabis. Hawaiian officials expressed confusion over the original decision to go after medical cannabis patients, including Retired Supreme Court Justice Steven Levinson who states “I’m a little puzzled as to why the distinction between medical marijuana and medical opioids.”

Currently, medical cannabis patients (and caregivers) are forced to choose to follow a doctor’s recommendation or  retain their Second  Amendment rights. For some this is an easy choice. But for others giving up the liberty of gun ownership means also giving up their livelihood or means of defending their families. The Gun Control Act of 1968 (18 U.S.C. § 922) prohibits the sale of firearms from federally licensed dealers, to among other categories, any “unlawful user of or addicted to any controlled substance.”

In a 2011 letter  the Bureau of Alcohol, Tobacco and Firearms (“ATF”) wrote that “Any person who uses or is addicted to marijuana, regardless of whether his or her State has passed legislation authorizing marijuana use for medicinal purposes, is an unlawful user of or addicted to a controlled substance, and is prohibited by Federal law from possessing firearms or ammunition.” It is worth noting that since 2011, thirteen states have passed comprehensive medical cannabis programs.

On forms, including Form 4473, the ATF warns that “the use or possession of marijuana remains unlawful under Federal lax regardless of whether it has been legalized or decriminalized for medicinal or recreational purposes in the state where you reside.” The 2011 ATF letter warns that if gun dealers are aware that a potential buyer simply possesses a medical cannabis card, then this is “reasonable cause to believe” that the person is an unlawful user of a controlled substance.

Controlled substances as defined by federal law include cannabis, but do not include distilled spirits, wine, beer or other alcohol. A federal firearms law only restricts firearm ownership to those who are using controlled substances “unlawfully”, but aside from a medical cannabis card, this metric is nearly impossible to detect, and severely under reported for other substances. Users of alcohol and opioids will typically have no problem obtaining a firearm, unless they are visibly intoxicated at the time of purchase. Additionally, while some states have passed laws preventing alcohol abusers from obtaining firearms, alcoholism and alcohol abuse is not something that is widely looked into during the federal background check process.

There is an undeniable safety component  that comes into play when any firearm user  is under the influence of a substance, even if the substance is doctor recommended. In providing supposed justification for denying medical cannabis patients firearms, the Ninth Circuit Court of Appeals held that while “[i]t may be argued that medical marijuana users are less likely to commit violent crimes, as they often suffer from debilitating  illnesses, for which marijuana may be an effective palliative… those hypotheses are not sufficient to overcome Congress’s reasonable conclusion that the use of such drugs raises the risk of irrational or unpredictable behavior with which gun use should not be associated.”

Despite the statements of Attorney General Sessions and other opponents, cannabis does not lead to violence in the same way alcohol and other substances do. A January 2016 Study published in the Journal of Drug Issues, found that  “There is no evidence of negative spillover effects from medical marijuana laws on violent or property crime. Instead, we find significant drops in rates of violent crime associated with state medical marijuana laws”  For comparison, in an average month, an estimated 8.9 to 11.7 million firearm owners binge drink, and among men, deaths from alcohol-related firearm violence equal those from all alcohol-related motor vehicle crashes.

The Founding Fathers envisioned a country that would be based on limited government, individual liberty, and the principle that the right to bear shall not be in arms infringed.  Forty-six states have passed some form of medical cannabis program, and it is a certainty that each of these programs has gun owners who participate as patients or caregivers. We must reconcile the ability of a doctor, under the First Amendment to recommend medical cannabis for a debilitating condition with an individual’s right to bear arms under the Second Amendment. Is there some form of safety risk when a gun owner is under the influence of any substance whether it be alcohol or opioids or cannabis? Without question. But is this safety risk worth the price of  individual medical choice and liberty? Unlikely.

Do you mind if I quote a few of your articles as long as I provide credit and sources back to your blog?
My blog site is in the exact same niche as yours
and my visitors would genuinely benefit from some of
the information you present here. Please let me know if this okay with you.
Many thanks!